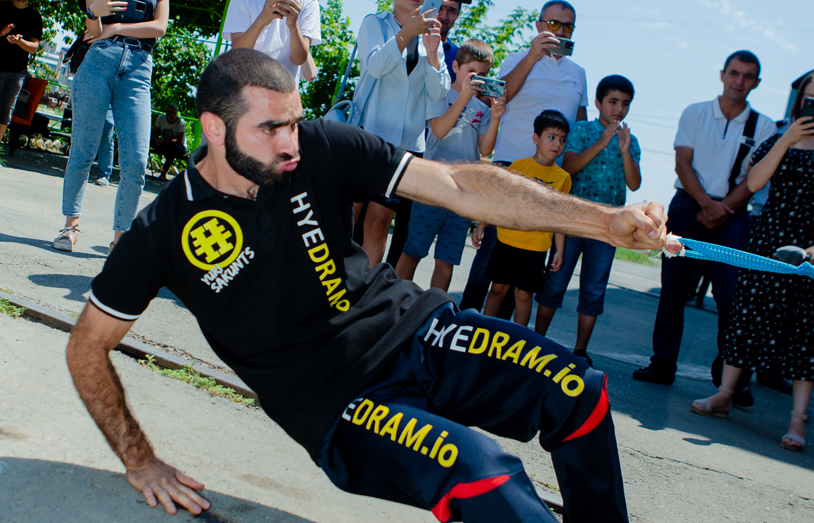 Yerevan, Armenia, August 4, 2022, Today, in Metropoliteni El-Havaqakayan, at exactly 1:15 pm, local time, YURI SAKUNTS, the Armenian boxer/strongman, broke his own world record in exceptional human strength by pulling two metro subway railcars weighing a total of 65 tons, for a distance of 20 meters, using only with his pinky finger!

A large and enthusiastic crowd of energetic supporters was on hand to witness this grand achievement. Sakunt’s first record was previously set on February 25, 2019 when he pulled a wagon weighing a mere 33-tons for a distance of 20 meters, again, using only his pinky finger.
“The Armenian spirit never ceases to amaze me,” said Donald Wilson Bush, Co-Founder of HYECoin, Inc.

“Yuri is such a great leader and an inspiration to everyone, Bush concluded. “He truly represents the unstoppable Armenian spirit and we are all proud of him today!”

Yuri Sakunts, is an amateur boxer and Armenian martial arts champion. He is also a two-time power triathlon world champion and bronze medalist of the power wrestling world cup. Prior to this, Sakunts set four other world records in addition to the one he now achieved. After setting twenty-two records in Armenia, he presently holds more records than any other person in the country.

While Sakunts’ list of accomplishments as a five-time world record holder have already been certified by the World Sports Organization (WSO) and Vajra Book of World Records, he is currently making application to have the Guinness Book of World Records to recognize his outstanding achievements.

In other pursuits, Yuri Sakunts has supported the youth of Armenia through various athletic programs and, for many years, he has encouraged autistic children to push their boundaries through athletics and strength training. Sakunts’ commitment to improving the lives of children has captured the attention of numerous organizations that are proud to sponsor his world record challenges.

HYEDram/HYECoin Inc. is committed to revitalizing the Republic of Armenia by supporting innovative programs that promote community and economic development through education, sportsmanship, medicine, banking and start-up business. HYECoin, Inc. is a force-multiplier in the crypto marketplace with products for the Armenian Diaspora and others focused on generating revenue through transactions with participating companies who agree to settle accounts with customers, vendors, suppliers, and service providers using the HYEDram stablecoin. The goal of HYECoin, Inc. is to significantly impact the growth of the Armenian GDP.

HYECoin, Inc. is the first company in the United States to launch a stablecoin pegged to another country’s fiat currency and not the USD$.